Wind energy is natural energy that can be utilized. Humans have been using wind energy for thousands of years. In facilitating life, such as sailing a cargo Rotating turbine baler The turning of a stone mill to grind seeds into flour. At present, we can use to generate electricity. Since wind power is generally available, there is no need to buy clean energy. Does not cause danger to the environment And can be used endlessly. “Wind turbine” is a device that is used to extract the kinetic energy of the wind. And transformed into mechanical energy From then, mechanical energy is utilized, that is, when the wind flows through the turbine blades Will transfer the kinetic energy to the turbine blade Causing the turbine to rotate around the axis Can use the energy from this rotation to use

Wind turbines used in Thailand from the past to the present are wind turbines, wooden turbines. Used for pulling turbine, baler into rice fields in Chachoengsao province. Windmill leaves windmill leaves Used to pull saltwater barge into salt fields Samut Songkhram Province And multi-blade wind turbines Made of metal sheet, used for pumping water from wells up into the storage tank The use of wind turbines for electricity generation is still undergoing testing and development.

Currently, the development of wind turbine technology for electricity production has been continuously developed. Many countries around the world have paid attention Especially in Europe such as Denmark Wind turbines that have been developed will have different characteristics and shapes. But if classified according to the characteristics of the axis of rotation of the turbine will have 2 types which are 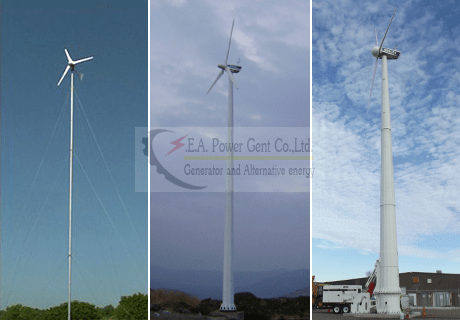 Is a wind turbine that has a rotating axis parallel to the direction of the wind, with a propeller perpendicular to the wind force There is a device to control the turbine to turn in the direction of the wind, called the rudder, and there is a device to prevent the turbine from damage during a strong wind such as a storm and is located on a strong pole. Horizontal axis wind turbines, including windmills, windmills (Windmills), wind turbines, leaves and silks. Commonly used with water traction machines Bicycle wheel wind turbine Wind turbine for generating electricity with propeller type

Is a wind turbine with a rotating axis and propeller perpendicular to the movement of the wind horizontally Which can be able to receive the wind horizontally in all directions Works well with low-speed air currents. Is a technology that has been continuously developed Suitable for tall buildings in large cities

Horizontal axis wind turbines are the most widely used type. Mostly designed to be a type that drives the turbine blade with lifting force Nevertheless Vertical axis wind turbine Which has been developed a lot in the latter, has also received more attention. This is because the advantages over the horizontal axis are In the vertical axis, regardless of the direction of the wind, it can rotate Without the need for a control device so that the turbine is facing the wind In addition, the vertical axis type Generators and transmission systems are placed closer to the ground than the horizontal axis. When the problem is easier to fix than a horizontal axis stuck on a tall tower.

1. The propeller is a wind power receiver and transformed into mechanical energy Which attaches to the spindle and sends the force from the spindle to the spindle shaft
2. Spindle shaft which receives force from the rotor axis And transmitted through the power system To spin and spin the generator
3. The transmission room, which is a system to adjust and control the rotation speed Between the spindle shaft and the shaft of the generator
4. Engine room, which is large and important for wind turbines Used to contain various systems of wind turbines such as gear systems, generators, brakes and control systems.
5. Power generator Responsible for transforming mechanical energy into electrical energy
6. Electric control system Which uses a computer system to control the operation And supply electricity into the system
7. Brake system is a mechanical system to control the rotation of the impeller and the shaft axis of the turbine. When receiving wind speed Beyond the ability of the turbine to accept and during maintenance
8. The neck axis rotates to support the wind direction It controls the turning of the engine compartment. For the propeller to receive the wind direction by electronic system Connected to have a relationship And the rudder receives the wind direction at the top of the machine
9. Anemometer and wind direction Which connects the signal cable to the computer system To be a measure of the speed and direction of the wind So that the computer can control other mechanisms correctly
10. The wind turbine pillar is the bearing unit that is upstairs. 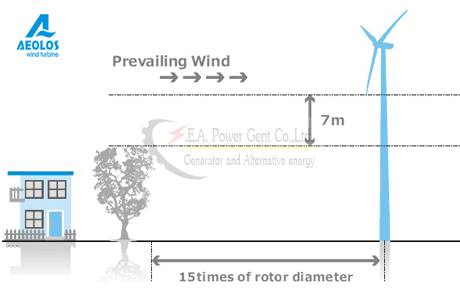 Wind turbines and their use

There are many types of energy stores. Much depends on the work to be used, such as If it is a turbine to produce small power, the battery is often used as a energy storage