Many people have been to the airport together. If anyone has never been At least I have probably seen the plane in the form. Or have been on television for some time For this plane, you might have seen something under both wings, more or less, depending on what the plane is. And used for what? For all of this I have told you Will lead to the mention of aircraft engines The engine that looks like this jar is called the Gas Turbines or translated into our home language. Gas turbine engine

What is a gas turbine?

Gas Turbine is an engine designed to convert energy in the form of fuels into useful energy such as shaft energy. Or the high-speed propulsion of a gas turbine. The gas turbine will consist of hot gas production and hot gas to energy conversion. Are air compressors, combustion rooms, and gas turbines The work power from some gas turbines will be used to propel compressed air. Causing the air to rise to high temperature, when burning, it will get hot gas with high pressure running through the turbine

Component Turbines engine
How does a gas turbine work?

Combustion area
Half-cut image of a flame can

The nozzle is on the right Responsible for continuously injecting fuel The gas will run through a small hole. And an explosion Turned into a high-speed gas running to the left

To the left of the combustion chamber Part of the turbine In the picture on the left, there are 2 parts. The first part is used to drive the compressor. Which the shaft of this turbine connects to the compressor in the same shaft The second part of the turbine is used to drive the propellers of the helicopter. These two axles are not stuck together. But with the same axis Use bearings to separate movement
Types of Gas Turbine

Gas Turbine is divided into 3 types which are

Turbojet engine: Turbojet engine provides thrust by accelerating the speed of all air mass through the engine due to the speed of the air mass ejected to achieve thrust. The turbine system of the Jet engine is designed to receive The force of hot air currents or exhaust, just enough to rotate the compressor and other equipment. All the thrust (100% of thrust) is caused by the mass of the air blown out (exhaust gas).

Turboprop engine: Turboprop engine provides thrust by changing The energy from the mass of gas into power or mechanical energy to be used to spin the device to rotate the compressor and the propeller. The shaft or turbine shaft of the turbine is attached to the propeller. Through the reduction gear system, approximately 90% of the total thrust comes from the impeller and only less than 10% comes from the mass of hot gas or exhaust air of the exhaust.
Turboprop

Turbofan Engine: The Turbofan Fan Engine will be ahead. And has an enclosed structure called the fan duct. It is driven or rotated at the same speed as the compressor (except free turbine). If it is a free turbine, it has the same speed as the last turbine after the turbine that drives or turns the compressor. The air mass from the fan will Is pushed out from the mass of air passing through the engine or may be mixed with the air mass passing through Inside the engine At the end of the engine More than 75% of the energy or thrust comes from the mass of air from the fan and less than 25% from the exhaust gas.
Turbofan

1. Gas power plant Usually a generator for backup power (stand by) and helps to increase production. When the demand for peak electricity (peak load) has a capacity of 1 – 60 megawatts, in addition to being used as a power generator for electricity production Gas turbines are also used for other uses. For example, used as an engine to drive large pumps.

2. Use as a direct engine such as Engine, airplane, boat or even acetate website (Y2K) 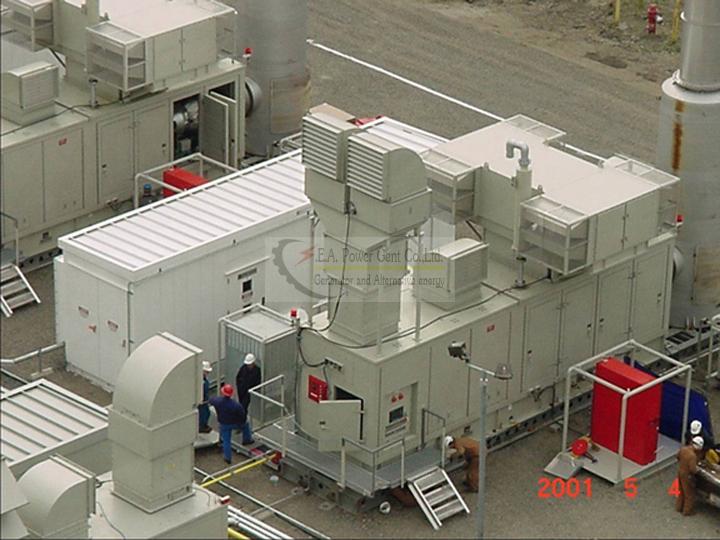